I drank more bottles of this root beer than normal and every time I got something different. The Body was sometimes sweet and full, sometimes watery and lacking. The Bite was sometimes harsh, sometimes smooth. The Head was never very frothy but ranged between nonexistent and not bad. It always fizzed away quickly though. The Aftertaste was sometimes (see a pattern here?) very nice and of vanilla, and sometimes very weak.

Ok, what’s up with that? Whatever happened to quality control and process consistency? I have strict standards and try to recreate the exact same drinking situation with each review but this one was all over the place throughout the whole six pack. The inconsistency of it all was appalling. “Tastes like root beer used to taste”? Really, it seems like they can’t remember and tried several things. Though sometimes the root beer was really good, I just can’t in good faith call the brew drinkable when I’m not sure what it’ll be. So sorry Triple XXX, you get a two and a half. See how it rates against other root beers.

The Body has a solid sassafras flavor with some creamy vanilla. Other than that though, it is rather simple, which isn’t necessarily a bad thing. There is a nice little spice Bite that comes in after the initial contact but it is still very smooth. The Head is very tall, but it fizzes down very quickly, so it loses some points for that. The Aftertaste is more sassafras and vanilla that lasts awhile and has some bitter hints at the end. 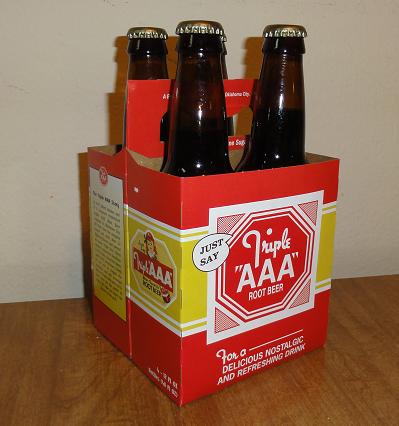 After being lost to the world for 38 years, Triple AAA Root Beer has been relaunched recently by the Bricktown Candy Co. in Oklahoma City, OK. This is the fruition of a goal owner Justin Thomas had when he first opened his candy store. ” I wanted to have a soda line that I could sell in the off season….I had an off season at the beggining when I opened the candy store. The first week in business I had a newspaper guy come in to do a store. He suggested I not open my own branded soda company but open the old Oklahoma Brand that I had on the wall behind me. So I did. … I had to pull my hair out to get it to open but we finally put all the pieces together.”

A large part of the reason that it was so difficult is that the original owner is deceased and took his secret recipe with him. Justin was able to track down the descendants and working with them, was able to bring back the flavor they know and love. As for now, Triple AAA Root Beer is only available at the Bricktwon Candy Co. but Justin hopes to expand in the future. Here’s wishing him the best of luck with his root beer endeavor.