You may not know this, but I’ve dabbled quite a bit with home root beer brewing. I mean, you should know it, in as much as I’ve blogged my adventures of it. To summarize though, the biggest issue with making Seal of Approval quality brew was getting good carbonation. I had tried three main methods; Yeast, dry ice, and just using carbonated water. All had their drawbacks. Yeast you have to be careful with so it doesn’t over carbonated, explode, or generally make the root beer taste yeasty. Even in the best case scenarios, it makes the root beer taste a little yeasty. Dry ice is really cool for parties, but it’s hard to get a good carbonation from it. Trying to pressurize with dry ice also results is explosions. The best I could find was using carbonated water. This works decent, though the carbonation just isn’t quite there. But it had been my go to for awhile, and I had two nice 1.5 gallon ice tea dispensers that I’d use for root beer parties. But I’d always wished for a keg. The problem was, kegs are really expensive and a real pain to use in a home kitchen setting. Then one fateful day, a coworker told me about the GrowlerWerks uKeg.

The uKeg is a pressurized growler that’s intended to make people’s beer taste tap fresh for up to two weeks. It’s essentially a mini-keg system that’s easy to use, clean, transport, and finally let me get the perfect root beer I’d been searching for. Let me walk you through how it works. It has a pressure regulating cap that is charged with a standard food grade 16g CO2 cartridge. After filling the uKeg with liquid, you adjust the regulator until you get the desired pressure, displayed on a convenient gauge, and then you’re set. There’s a goose-neck tap to dispense your bubbly brew in the most satisfying way possible. Additionally, it’s vacuum insulated so you can keep it cold for nearly 8 hours outside of the fridge (I have verified this). And it’s small enough that it easily fits inside most fridge door milk shelves.

I immediately knew that this was at last the product I was searching for. While the instructions don’t really address homemade root beer, after extensive research I can share how this is easily done. There are really two ways to try and carbonate your root beer in the uKeg, full forced carbonation or starting with carbonated water and letting the uKeg finish it. I recommend the latter, as getting a good root beer fizz takes about 2 weeks and three CO2 canisters, whereas starting with carbonated water takes only 1 CO2 cartridge and 3 liters of carbonated water. You could even do 2 liters of carbonated water and 1 liter of regular water as long as you let it sit as least three days before serving. I’ve developed a nice base recipe that you can use to get started.

The basic idea is to make your own root beer syrup and then gently pour the syrup and the carbonated water into the uKeg after charging the cap. After it’s sealed set the pressure to 15 psi then swish the uKeg around to stir the mixture. Shaking is bad as it can get root beer into the regulator values and mess them up. Then just let it settle for awhile and you’re good to go. I recommend making it at least a day before you want to serve so it can fully settle. I also recommend making the syrup and chilling it and the carbonated water the night before, as the colder the ingredients when you mix them, the less CO2 will be lost.

So if you love making homemade root beer, you need to buy a uKeg. If you know someone who loves making root beer, it’s the perfect Christmas gift and just the right time to order for the holidays. Feel free to ask me any questions about additional root beer making tips and happy root beer brewing. I’ve been hosting root beer parties at home and at work this past year and it’s been a real hit. I’ll post new recipes from different extract brands from time to time. 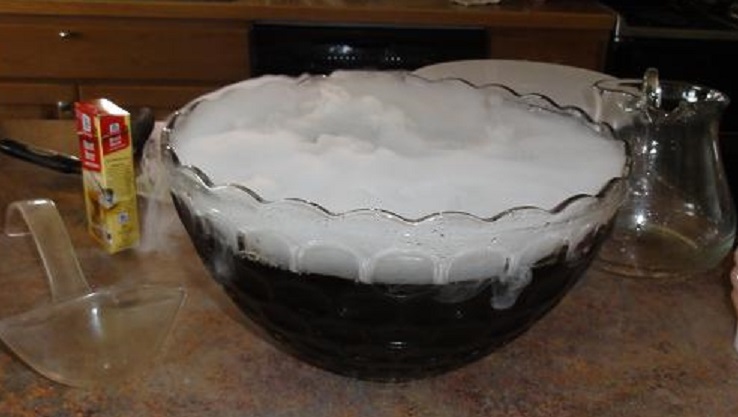 Halloween is coming, which means creepy costumes, too much candy, pumpkin spice everything and wonderful parties. And what Halloween party would be complete without a big cauldron of bubbling brew? Here’s a recipe that I’ve been perfecting for witches brew root beer, guaranteed to be a hit. Make it in a cauldron or a punch bowl if you don’t have a cauldron. But seriously, if you’re going all the way, you really should get a cauldron. Nothing impresses your friends like a big ol’ cast iron cauldron bubbling with root beer, except for the flavor of this root beer.

Directions
Add sugar, honey, vanilla, root beer concentrate, spices, and 4 cups of water in a pot and bring to a rolling boil while stirring.
Reduce heat and let the mixture boil on low for 10 minutes, stirring occasionally.
Add to cauldron with the rest (28 cups) of the water.
Crush half the dry ice and add to the cauldron, stir the mixture until the dry ice is largely disolved, this adds the primary carbonation
Add second pound of dry ice as a single or several large blocks. This will bubble for the duration of the party and help maintain the carbonation level
WARNING Do not seal a lid on your root beer while dry ice is bubbling, it will explode, trust me… 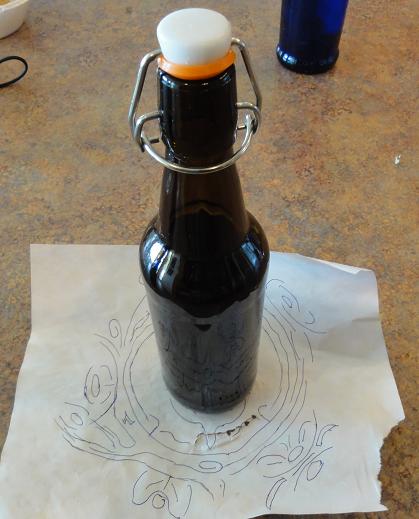 This last Mother’s Day weekend, I was back at my parents house to show my love for my wonderful Mom, try and slay a wild turkey (I didn’t even see any), and of course, make some root beer. My brothers and I felt that we had sufficiently mastered the Mr. Root Beer Kit and I had a bolder idea. I wanted to carbonate my root beer without any yeast by using dry ice. I also wanted to try the Mission Recipe using some Trader Joe’s Mesquite Desert Honey. I eat it all the time at home and the flavor is mild with a bit of a bite to it. I figured it would make excellent root beer, especially when mixed with Bourbon Vanilla extract. I got some McCormick Root Beer Extract and made a full gallon of flat root beer following the recipe. Then it was time for the alchemy (chemistry). 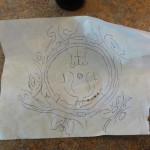 If you’ve never read the Manga or seen the Anime “Full Metal Alchemist” you should, for that’s the type of alchemy I’m into. It seemed a simple proposition. Under pressure, 12 oz of soda contains about 2.2 g of CO2. Therefore the all that should be needed is to measure the appropriate amount of dry ice (solid CO2), plop it in the bottle or growler, cap it, use the transmutation circle to transmute some root beer, and voila. The dry ice should sublimate, pressurize the container, then be dissolved into the liquid, fully carbonating it. If measurements or something else was wrong with the plan, surely the transmutation circle would take care of everything. What could possibly go wrong? They could explode if we put too much in. That’s what could happen. So as a precaution we had a large cooler filled with ice ready. After transmuting our root beer we would quickly seal them in the cooler so if they did explode, the blast would be contained. So then, all bases covered. 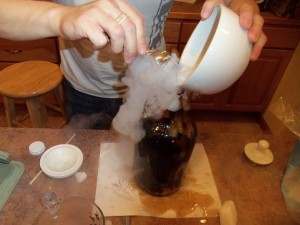 Adding the dry ice before transmuation

The first spring top bottle went ok, though we had one heck of a time crushing the dry ice small enough to fit inside. After it was all in, we closed the top, placed our hands on the circle and did what all good alchemists do after that, and then into the cooler. We waited a few minutes and didn’t hear any explosions, so that was good. I cautiously cracked open the cooler and heard a hissing sound. It seemed that some of the carbonation was escaping the seal. Hmm. Oh well, move on to the half gallon growler! This is the one I got from Dicks Brewery. I figured that this should be the easiest since the mouth was much larger. However, the large chunks of dry ice started reacting violently, spilling root beer out the top. The obvious solution to this would be … put it in FASTER! Then transmute! Since it didn’t seem to be working. Now cap it, and quickly get it into the cooler. Too Late, the transmutation rebounded … BOOM! Just as I was closing the top of the cooler off blasted the cap. Root beer was everywhere. Luckily I was spared injury and was only covered in my sticky honey brew. My mother was understandably less than pleased and we were ordered to take our alchemy outside and clean. 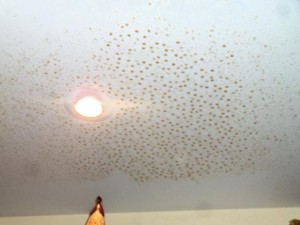 The ceiling, after the explosion.

We did as told and as we cleaned, we thought that we had the situation under control, but we were wrong. Unbeknownst to us, our actions had been observed, and like carrion birds upon a medieval battle field they descended upon the carnage. WASPS! All the more startling was the fact that it was night, and we were standing on ladders trying to mop the ceiling. Things had gone from bad to worse. But, the foolish beasts were so hypnotized by the utopic predicament and their own gluttony to offer much of a fight, especially against a skilled alchemist, before you train the mind you must train the body after all. I quickly defeated the hordes and then went to check the remaining bottles as well as finish up the last one. When there was no more hissing from the bottles I put them in the fridge.

The next day we gave it a try. It had a wonderful flavor just as I had expected, but there was no Head and it was almost completely flat. I could barely stand it with food. Oh well, try again? This time we added a pinch of cinnamon and nutmeg to it and poured our flat root beer into a punch bowl and dumped in all of the remaining dry ice, which sadly wasn’t even as much as we had attempted to put in the growler. We ate it with pizza about 15 minutes later. Still flat, still drinkable, barely. Something must be wrong with my calculations or maybe my transmutation circle and alchemy … Oh well, we’ll figure out. Maybe with some better extract and equipment. Who knows, but this is by no means the end. 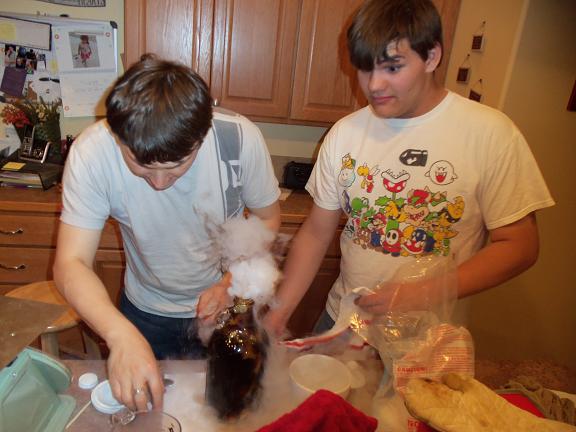 Clearly somethings not going right with our alchemy ... 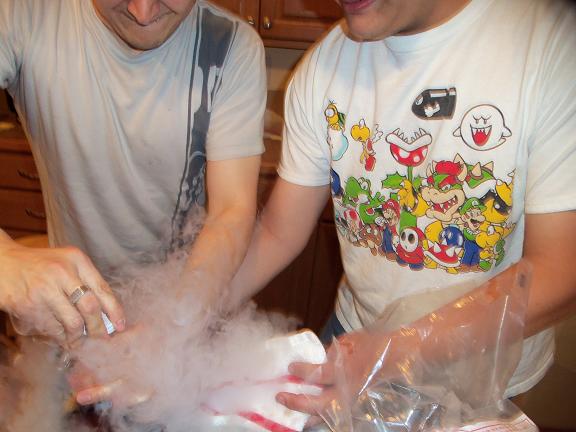 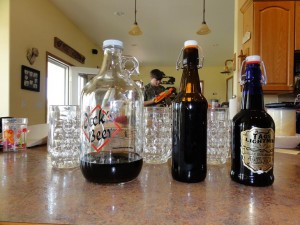 All that survived the blast 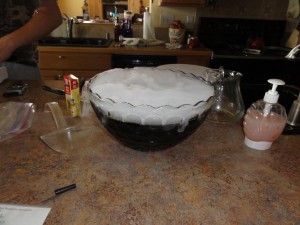