I saw someone post a picture of this on Facebook and I curiously asked where I could find it. They said QuikTrip in Minneapolis area. There are tons of those all around me! Alas the downside of driving electric, you have no idea what is being sold in local gas stations anymore. I mean, why would I go there? Root beer milk that’s why. So I did and I bought some. This root beer milk is actually made for QuikTrip, so it’s their house brand. It is also made locally. I have high hopes for a root beer milk. I’ve heard about it before and it seems to me like it could taste a lot like a root beer float if done correctly. So how was it?

It kind of tastes like root beer barrel candy at first sip, but the flavor is weak and off balance. The wintergreen comes through bitter and clashes with the milk flavor. Despite there being a lot of sugar, it doesn’t taste very sweet. It really doesn’t taste good at all.

Yuk! This is bad. Like, really not good. My kids wouldn’t even drink it. I have no idea who thinks this is good or why, but someone must. Yet I think it’s the worst flavored milk I’ve ever had. Stay away, unless you are a glutton for punishment.

My wife was shopping at Aldi for some ice cream treats and grabbed these cause they looked good and she knows I need moar content. I’d known about them for awhile but could never find them. I realize that I’m actually quite bad at tracking down things that aren’t root beer proper, and thus for over a year these had eluded me. Anyways, these are equal parts Barq’s Root Beer slushy thing and vanilla ice cream. They actually use Barq’s syrup and thus reading the ingredients reveals caffeine. I think these are the only caffeinated ice cream thing I’ve ever seen/had. They are in little conical type tubes that you squeeze from the bottom as you eat.

There’s a strong root beer flavor with that classic Barq’s taste. They definitely didn’t skimp on it. The vanilla ice cream is rich with a strong vanilla flavor as well, the combination of the two gives a wonderful root beer float experience.

This is by far the best root beer float frozen treat I’ve had. These things are delicious. Barq’s Root Beer float in a tube, I can’t recommend it enough, unless you absolutely need a decaffeinated ice cream treat. But at only 3 ounces a tube, and only half of that root beer, the caffeine is pretty trivial. Either way, I can’t recommend these enough. Get ’em if you see ’em. 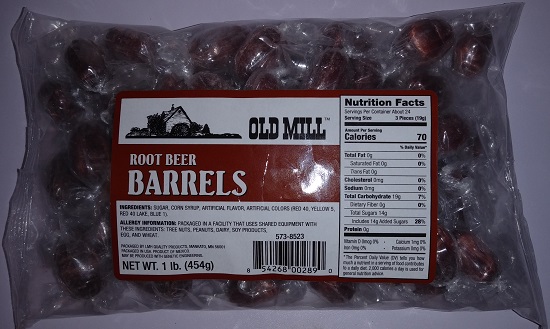