Back in 2020, before my kitchen got broke and needed to be replaced, I bought this and some other condiments off of Amazon. Then my kitchen got dead and I had to wait some ages while it got fixed (much nicer at least) before I could get a nice rack of ribs and give this a try. Thankfully the best by date is still another 6 months out. Ass Kickin’ was originally a hot sauce, using a teenager type pun (of which I approve) by having an ass, kicking. My kids sure like it cause they love this story called Brighty of the Grand Canyon, it’s about an ass named Brighty, anyways. This is very mild, no heat at all, which is good I guess but kind of off brand. But what do I know. Anyways, we made some ribs and gave this a shot.

By itself this isn’t very good at all. The flavor is acidic with tomato and also really dark and smoky but the flavors aren’t balanced. You can’t really pick out the root beer but I didn’t really expect that since the sweet spices of a brew would mingle and be lost. When cooked on ribs the flavor improves quite a bit and the ribs with it weren’t bad, but there are many more BBQ sauces I’d rather have on my ribs.

So yeah, I’m not really a BBQ sauce expert to describe how it should be, but I know what I like and this isn’t it. I couldn’t imagine dipping anything in this sauce which is one of my favorite things to do with BBQ sauce. I like the consistency of this much more than the Sprecher sauce but the flavor is worse. Maybe it’d be better if it were spicy. I don’t know. Either way, avoid this please.

The last good of my Sprecher Root Beer Products order. The Barbecue Sauce. I love me some barbecue sauce. I always put it on burgers, fries, chicken strips, ribs, etc. I always am pouring copious amounts of it on my barbecue. In my opinion, fries are merely a vehicle to eat barbecue sauce. So this was the one I was the most excited for. We waited for a special occasion and then made a nice rack of ribs topped with the sauce for a first taste.

It’s a rather runny sauce, which is unexpected. The flavor is a little ketchupy and tangy, with a bit of tart spice. The root beer doesn’t really come out like it does in their mustard. When cooked on ribs, it thickens nicely and gives a great flavor, though not the root beer flavor that I’d hoped.

That was kind of disappointing. I later tried it on a hamburger and a chicken burger and some fries and I’ll just give it an okay. It’s not really my style, and the root beer doesn’t really shine though. It isn’t bad by any means, just not what you’ll probably be looking for when you get a root beer barbecue sauce. I’m looking for something thick that I can dip all my things, whereas this seems more like a marinade sauce than a finishing/dipping sauce. 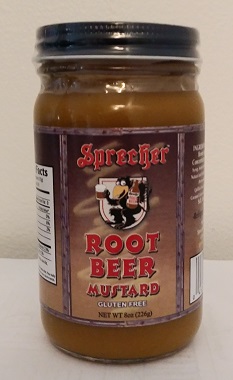 Remember back when I ordered all the Sprecher stuff and made my unboxing video? I know it’s been awhile but I just had all those tasty root beers that I was finding so I had to push this one back. But here it is now, finally you can know what I think of root beer mustard! It’s my first “Root Beer Condiment” post. I think that’s a good category. If not I’ll switch it later. This isn’t the only root beer mustard out there so I think it’s a good category. Anyways how does one test root beer mustard? Brats. Yeah. Got some kraut and brats and went to town, slathering this stuff all over it to see how it worked.

It is a nice sweet strong mustard. The sort that goes perfect on brats and polish sausages. You know that style. And then there’s a marked root beer flavor that comes in after the initial mustard part fades, to give the impression of washing down your bite of brat with a gulp of Sprecher root beer.

It’s quite yummy. I truly enjoy this stuff. Good job Sprecher. If it were more conveniently available, I think I’d keep it always stocked in my fridge. This truly epitomizes what a root beer condiment should be. A strong distinct base flavor with a good root beer accent to it. I can’t wait to see how they did with their barbecue sauce.