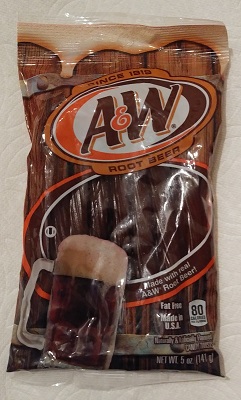 I am still burning through my Minnesota’s Largest Candy Store stock, though I’m almost done. These root beer licorice twists are also made by Kenny’s Candy, makers of the other, not-so-good licorice twists. These ones I assume are their premium variety, as they are actually packaged for sale outside of dedicated candy stores and they are sporting the flavor and branding of the most recognizable root beer brand on the planet. They also really hide who makes these, as you have to search deep in the fine print on the packaging to find out. I’m sure they’d want these to just be known as A&W Root Beer Licorice but I’m a stickler for calling them by who makes them. Anyways, I still like licorice and I quite enjoy A&W, so hopefully this time they will pull it off?

There’s a sweet, spiced root beer flavor that is not unlike A&W though the vanilla is missing. The flavor is still pretty mild but it is distinct enough that you don’t question you’re eating something There’s a waxy texture almost, so they are slipperier than other licorice I’m used to.

All in all they’re not bad, and far better then the other Kenny’s root beer licorice. I’m not sure I’d go so far as to seek them out, but they are enjoyable enough if they’re around. So, really, a step in the right direction, but I’m still searching for a better root beer licorice.