For some reason the folks at Frankenmuth Brewery decided that they’d spell beer the German way for their root beer. Interestingly they didn’t use any other German words. I guess they’re just a little bit German. There’s a wiener dog on the label and supposedly the brewery was also originally known for its purebred Dachshunds. But the brewmeister grew tired of the walking sausages and needed to get rid of them. He convinced a local boy to take them in exchange for the fresh root beer. I’m wondering just what the exact terms of the contract was. Hopefully the boy was getting more than a case, like maybe a 6 pack a week or a free frosty mug every time he showed up or something for as long as the dogs were alive. Then the name Frankie is either from the boy, the dogs, or hot dogs (franks), at least according to the bottle. They were probably very disappointed that III Dachsunds Root Beer was already taken, and they had to come up with another name. This is another brew that boasts “Michigan Beet Sugar” Those Michiganders must really love their beets.

The Body is fruity, really fruity, with a decent amount of vanilla. It’s also kind of sour and not very strong. It’s a very smooth brew without a lot of Bite to it. The Head has a good height but lacks the staying power to really be great. It’s alright. The Aftertaste is more fruity vanilla.

I never was a fan of sour fruity root beers. That boy must have been or the whole trade deal wouldn’t have made much sense. To each their own I suppose. See how it rates against other root beers. 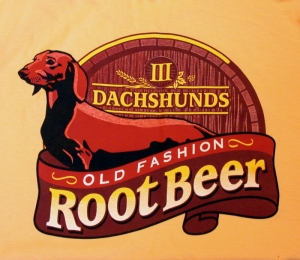 The III Dachshund’s Beer Company has just recently changed the recipe of their beloved root beer. Said Joe Halser IV, owner and creator of III Dachshund’s Beer and Cider, “We actually just tweaked our recipe and made our rootbeer a pure cane product. We also have a new label to brighten the appearance of our rootbeer bottle.” This is good news for those who try to avoid high fructose corn syrup, though it remains to be seen if the root beer will taste the same, better, or worse. Here’s hoping it will be better.

So the fine people at beveragesdirect.com brought to my attention that there were several fine brews that they sell that I hadn’t reviewed, including III Dachshunds,which just so happens to be the root beer analogue of Dos Equis (Two ‘X’s in Spanish, you know 2 ‘x’s, 3 Dachshunds, it totally makes sense). They sell a lot of it to one man in particular. He travels around the world, so more people have the opportunity to meet him. He gives motivational speeches, just by looking in your direction. He once said something stupid, just to see what it was like. He’s, the Second Most Interesting Man in the World (almost as cool as the Most Interesting Man). He doesn’t always drink root beer, but when he does, he prefers III Dachshunds. Of course when I heard this I immediately made arrangements to procure all of the necessary brews. So why does he prefer it?

Because it has an amazingly sweet and creamy Body. It has the right flavors, sassafras, caramel, vanilla, and hints of wintergreen. There’s a pretty good Bite from carbonation and spices as well, but it is still very smooth going down. The Head, unfortunately, is barely an inch tall. It is however very frothy so it lasts several minutes. The Aftertaste is creamy vanilla with accents of wintergreen.

This is a delicious brew. I understand why the Second Most Interesting Man in the World prefers it. Probably the next time I’m out deep sea fishing, safariing, white water kayaking, or otherwise adventuring in the second most interesting way possible, I’ll have this at my side, at least some of the time. Sayth the bottle, “Time for a Treat” Indeed. I’ll take two if you please. See how it rates against other root beers.