This was renamed to Good and D’Lish Root Beer sometime after I initially reviewed it. It was the first new root beer I found when I moved back to Seattle for grad school. I found it at the local Wallgreens and was very pleased to do so. I checked with the manager and found out that it was their premium store brand. They also have a Walgreens root beer in plastic. That’s something I’d like to see more of. Stores with their own gourmet root beer lines in addition to their cheap swill, or maybe just eliminate the cheap stuff all together like H-E-B and have your brand be something awesome. What’s cool about this is that it’s a 16 ounce bottle with a unique shape and one of those resealable caps. You don’t see those often on glass bottled sodas. They boast on the bottle that they don’t use any HFCS but they also don’t use pure cane sugar either, so it’s sort of a halfway effort for people who care about that sort of thing.

The Body is sweet and creamy though with a tad too much licorice. The Bite is nice and spicy. The Head is short, with a medium froth, which is rather disappointing. The Aftertaste is dark and almost candyish.

This is good, but the licorice is a little too strong for my tastes. Also the Head is too weak, so sorry Deerfield, no Seal for you. However, for a store brand this is pretty near top notch. See how it rates against other root beers. 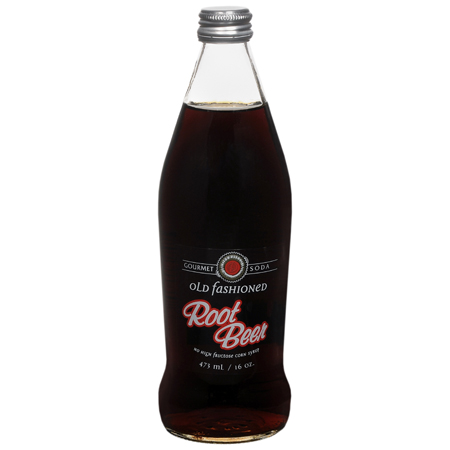 Walgreens, as part of a re-branding of all of their consumables, has changed Deerfield Trading Company Old Fashioned Root Beer to Good and D’Lish Root Beer. A company representative confirmed to gourmetrootbeer.com that the change is only the label and the recipe remains exactly the same. Said the representative “the Good and D’Lish brand is for the more upscale products and we felt that the Deerfield Root Beer fell in that category.” While the news is comforting to loyal Deerfield drinkers, it is rather disappointing to those who always seek out root beers to try, since it is still the same brew.