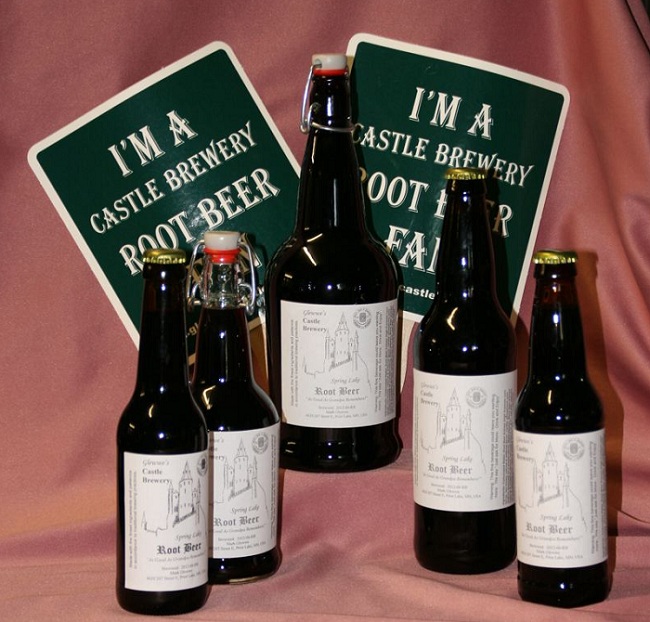 One of the world’s most delicious and unique root beers, Glewwe’s Castle Brewery Spring Lake Root Beer has just gotten even cooler. As the photos show, they have just added Eric’s Seal of Approval, which they so justly earned, to their labels in the top right corner above the castle. They are the first root beer to date to do so, though I’m sure they won’t be the last.

True, the Seal is a little small on their label but it is still quite legible in real life. They had to request a special black and white version since they currently don’t print in color. I must say that this is the fulfillment of a dream I have had ever since I came up with the concept of the Seal of Approval, and thus my joy is overflowing. One more lifetime goal accomplished! So now if you’re ever in a store and want a good root beer but can’t remember if Spring Lake is worthy of imbibing, rest assured, my Seal of Approval will be there, reminding you that it is. 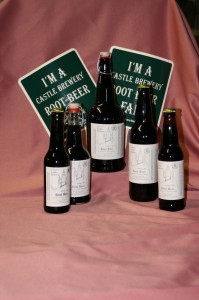 Spring Lake Root Beer in all of it’s many forms. 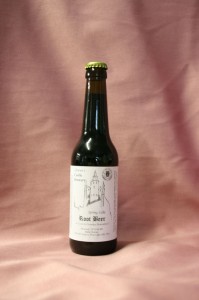 A closeup of the standard bottle.

Quite a long name. And not to be confused with River City Root Beer. You’re probably wondering why it’s River City Root Beer when there’s nothing about River City on the label. I too am wondering such a thing. On their website it calls their root beer River City Root Beer but the label says otherwise so I put both. But these guys seem to want to make my life difficult anyhow. Their brew doesn’t even normally come with a label. I had to ask for one when I dropped by. They have a really small operation in St. Paul where they not only brew beer and root beer, but they let others come in and brew their own concoctions as well. I had been trying to get this one for awhile. I had a friend who lived near there and I asked her to bring me some if she came for a job interview over here. She was invited but ultimately got another job before she came. Then I finally got to go over there to give a seminar at U of M. Acquiring this was my third and final root beer objective for the trip, with the first being find a new draft only brewery root beer (Town Hall) and the second getting 50 bottles of Spring Lake Root Beer to take home with me. Sadly, despite all of my crumpled paper and bubble wrap. Several bottles of root beer were smashed in each of my three pieces of checked bags, including one of my two bottles. I hate to do a review with only one bottle, but I had no choice.

This has a nice full Body that is sweet and creamy and even a little spicy from clove I think. There is some delicious honey and wintergreen in there as well. The spices give a solid Bite that still goes down smooth. The Head builds to a decent height and is moderately frothy. It lingers long enough but there are much better. The Aftertaste is sweet vanilla with hints of wintergreen, honey and spices. It lingers just the right amount of time.

Wow, what a brew! I knew after about the third drink that it was getting the Seal. But where to rank it. I was torn between high 4, and low 4.5. Why did I have to lose the other bottle?!? I ultimately decided to give it the lower of my inclinations, to play it safe. Though, still being in the top 20 is hardly a punishment. Between Town Hall Brewery, Glewwe’s Castle Brewery, and Vine Park Brewery, they’ve got quite the trifecta of micro-brewed root beers. I just hope those people living in the Twin Cities appreciate how fortunate they are. See how it rates against other root beers.

I always like to find an obscure microbrewery root beer, and this brew just screams low volume microbrewery. Conversations with Mr. Glewwe himself verify the infancy and scale of the operation (as does the primative website). The label is black ink on standard 18 lb printer paper that I think they just glue (Glewwe?) on the bottle. It seems to be printed out from an old ink jet as well, classic. The bottle itself is quite different than your standard long neck root beer bottle as well and it isn’t a twist top. It seems that they pay people $1 per six pack of empties and they don’t care about color or shape so they’re doing some good recycling. What a find! The big conundrum for me is that it is called Spring Lake root beer but it is from Prior Lake, MN. So which is it? Spring or Prior, or is it the Prior Spring? Whatever, on to the important stuff.

Wow! What a full and complex Body! There’s lots of wintergreen and creamy vanilla with some birch as well that surfaces after the initial contact with the core root beer flavors. There’s also a subtle honey flavor. It isn’t super sweet though so you can relish the flavors. The Bite is pretty mild but not absent. There’s some spice kick to it but an unbelievably smooth finish from the malto-dextrin. The Head is short and medium froth. It fizzes down quickly but not too quickly to seriously hurt the rating. The Aftertaste is creamy wintergreen with hints of vanilla and honey, though, wintergreen is by far the dominant flavor.

So again, wow! What an amazing and unique brew. It’s like they took a root beer and a birch beer and combined them in a way to get the best of both. The bottle does come with a warning reading “This fine beverage could leave you wanting more. We say ‘Just ask for More.’ Drink and Enjoy” I assume that More is one of their distributors or something, but indeed, this does leave you wanting more. Lest I be all praise it could use a better head and a slightly spicier Bite. It also says “Made with the finest ingredients and patience in accordance to traditional brewing practices.” I believe them on this one. They proved it. I highly doubt that this brew will remain in obscurity much longer, and all’s the better. I look forward to the day I can just pick this up at a specialty foods store near me. See how it rates against other root beers.