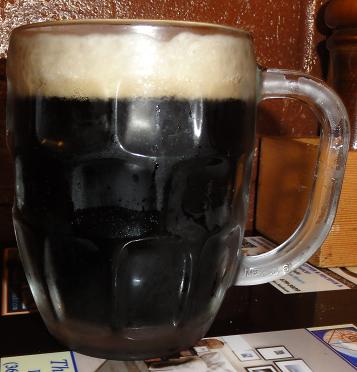 Coming off of the wild success that was the trip to Silver City Brewery, I searched to see if there was something else local that would involve a scenic ferry ride and beaches and found Flyers Restaurant and Brewery in Oak Harbor on Whidbey Island. Correspondence with the owner revealed that the root beer was only added a little over a month ago. Since the 4th of July weekend was that next week I figured that one of those days we could take a little day trip. We chose July 5. The ferry ride was not as long, nor as scenic but Whidbey was very fun especially the Deception Pass State Park. Lunch was at Flyers with the first thing ordered being a pint of root beer.

The Body is sweet and full flavored with a nice creamy caramel flavor in there as well from brown sugar and vanilla. There’s also something out of place, sort of sourish tart, that surfaces after the initial contact and disappears shortly thereafter leaving you to wonder if it was ever really there. It really detracts from the other goodness going on. The Bite is very smooth with little carbonation burn or spices. The Head is medium height and very frothy. It lasts the whole time you drink it. The Aftertaste is vanilla and caramel that lasts.

This stuff is pretty good. I like all of it except that strange flavor in the middle. It doesn’t build and is gone by the Aftertaste, but it’s there, really getting in the way of what would otherwise be a very wonderful root beer experience. Because of that it can’t get a Seal, but a solid 3.5. The owner says he’s still tweaking the recipe and hopes to bottle it when it’s dialed in. I welcome his efforts and look forward to the mature product. The food is really good. My wife got the fish tacos which were delicious (she let me have half of one). They have a challenge of eating a 3 pound burger and 1 pound of fries in 30 minutes but seeing is that is 1 pound more and 15 minutes less than the last challenge I took, couldn’t do it. I ordered their Fireball Burger instead which had habenero sauce on top of green chilies, jalapenos, and pepper jack cheese. I love spicy, but not the flavor of habenero. Unfortunately for me they put so much habenero on it that it was one of the prominent flavors, and it really burned, even me. So I regret that purchase and wish I had gotten the oysters and chips. Oh well, live and learn and warn the rest. 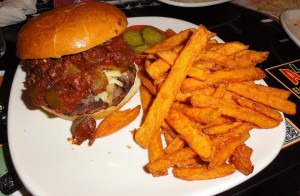 The Fireball Burger. Note the massive amount of spiciness piled on there. 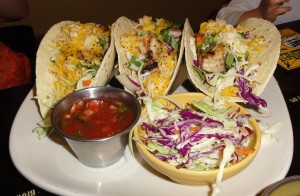 Inside Flyers Restaurant and Brewery.