Across the Puget Sound from my home is the city of Silverdale and the Silver City Brewery. They’re unique from the other breweries that also do root beer in that they use it in their cooking and are proud of it. They make a root beer barbeque sauce and use it on their baby back ribs and their pulled pork sandwich for example. But that’s not all, they also have a “BBQ Root Beer Burger” on the menu, which has bacon, onion rings, lettuce, tomato, and lots of the root beer BBQ sauce. Now that’s what I like to see. Name your burger after the root beer. There should be more of that. Back in June, on a nice sunny Saturday, my family and I took the 1 hour ferry (our first time) across the Sound to Bremerton to try out this brew and the food made with it.

The Body has a sweet honey and sarsaparilla flavor that’s a little weaker than I prefer. It isn’t really creamy either and is almost fruity. There’s is a good carbonation fizz in the Bite but not a lot of spice. It’s very smooth going down. There is almost no Head, sadly, which always surprises me from a draft brew. The Aftertaste is more honey with sarsaparilla that lasts the right amount of time.

Not bad at all, in fact, it’s pretty decent. It’s not my preferred flavors though and I wish it were a little stronger. Plus it losses some points on the Head, but it’s drinkable and goes really well with the BBQ Root Beer Burger. That burger is delicious! One of the best brewery burgers I’ve ever had. I LOVE their root beer barbeque sauce. So sweet and tangy and spicy. The ribs are really good too and the portions are large. You’ll definitely leave feeling satisfied, unless you really just wanted a Seal of Approval brew. Otherwise, if you’re in the Seattle area, the trip, with the wonderful views on the ferry and food, is well worth it. 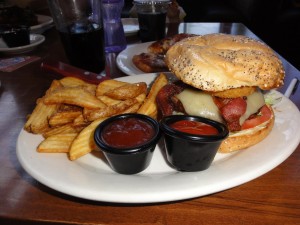 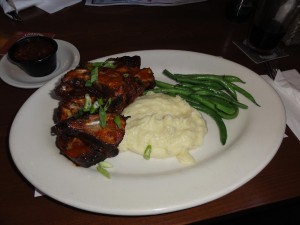 Ferrying through the Puget Sound on a quest for root beer!