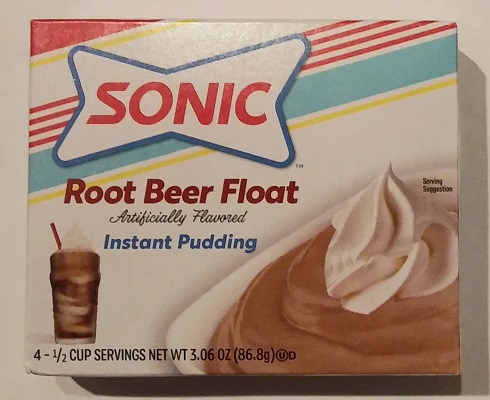 I was browsing through Amazon trying to find some root beer stuff to write about and I noticed this. Root beer float pudding? That’s a new one but at the same time, it makes perfect sense. A rich vanilla pudding with root beer flavor could make a great root beer float. This is made by Sonic, a drive-in chain that sadly doesn’t feature their own brand of gourmet root beer in frosty mugs, despite their roots (pun intended) as a root beer stand. Honestly the more I think about it the more I’m just utterly disappointed in them as a company. Abandoning their past root beer glories. Oh well, as penitence they’ve made me a pudding to write about so I suppose I shall begrudgingly give them a pass, for now. Honestly, I’ve never eaten at Sonic, largely because of their utter lack of original root beer. Anyways, how is this pudding of theirs?

There’s a nice creamy vanilla flavor with a mild generic root beer taste. The Aftertaste is mostly vanilla with a little root beer. Overall it pulls off root beer float pretty good, but still has a rather cheapish instant pudding underlying flavor and texture though.