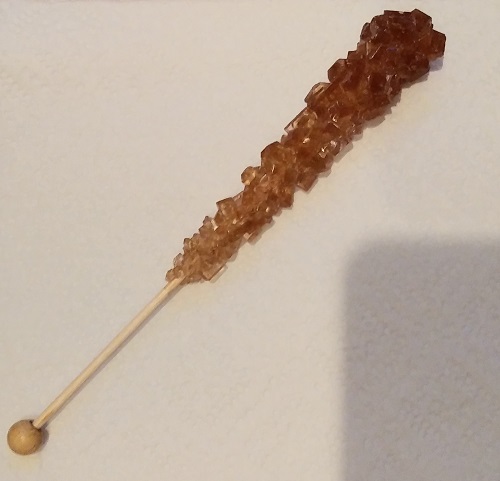 Richardson Brands got their beginnings in the 1890s making pillow mints. Soft pillow mints. Which are not mints you put on your pillow, but are mints that look like pillows. Through the decades they’ve acquired other nostalgic sorts of candies including the original makers of these crystal sticks, Dryden & Palmer® Rock Candy. Which are of course, just rock candy on a stick rather than a string. But crystal stick sounds much cooler than rock candy anyhow so that’s why people want to market it thusly. At least I think. Anyways, I was at a candy shop and asked if they had any root beer candies and they had those so I got one to tell you all about. Also I really like rock candy as a concept, cause it’s cool how they make it. Though I’ve never been able to successfully do so myself, I guess it’s “easy” to make at home. Anyhow, on to my tasting.

The root beer flavor is mild, generic and very much like other root beer hard candies. It doesn’t have much of a wintergreen or licorice taste on it like some do, which I prefer. The texture is, rock candy. Very bumpy licking, strange crunching if you chew. It tastes good either way.

All considered, this is a fun treat. It’s different and the root beer taste is what you’d expect, nothing more nor less. I can recommend this one, if you’re in the mood for a rock candy that is, on a cool little wooded stick. I imagine the novelty of these things wears off after more than one every month or so.