Several weeks ago I went down to TMC Connect, the Tesla Motors Club conference, in Monterey. I was on a panel on electric vehicles and the grid. I got a ride down with a fine fellow named Paul, who came from Vancouver, BC. We drove in his Model S, stopping at the super chargers along the way, and by so doing made it to Sacramento from Seattle in about 16 hours. Did I mention it didn’t cost us a penny since super charging is free? Yeah, Teslas rock. Anyhow, when we were a little south of Portland I asked him if it would be possible to search for some root beer at a brewery. He said he didn’t mind so I searched Google maps for breweries in the town of the next Super Charger, Springfield. I called up the first one, Hop Valley and asked if they had root beer, which they said they made their own. When we entered the location on the map, we saw that it was right next to the Super Charger. Ultimate root beer super charging win! We wouldn’t even have to go out of our way and we could try the brew during our 30 minute charging break. Even though it is made by Hop Valley, it is called Dr. Ziggy’s after the owner’s father.

The Body is sweet and sort of spicy with a decent sassafras flavor and some brown sugar hints. The Bite, however, quickly turns acidic sour and prickly and overpowers the good flavors detracting significantly. The Head, as you can see, is fabulously tall and lasts the whole time. The Aftertaste is a nice buttery, nutty flavor which is really, really good.

So this one starts out decent, turns bad, and finishes wonderfully. Add in the beautiful Head and I’ll give it a solid 3.5. We didn’t try any of their food since we’d eaten at the previous Super Charger, but I hear that the brewery smokes their own meats on the roof of their establishment. This is definitely the place to go when you’re road tripping in a Tesla between Washington and California. Or just drive straight there, with a Tesla, all it costs is time, and the drive is time well spent. 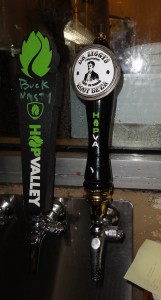 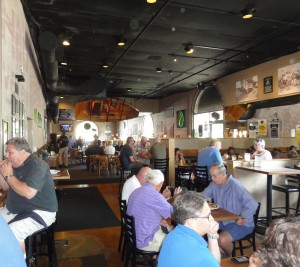 The inside of Hop Valley Brewing Company restaurant.