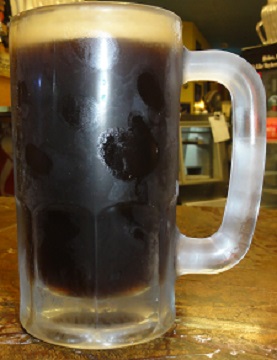 Two weeks ago I went to Boise to visit my sister. This trip had been a long time coming, as I had never visited her there and she moved there over four years ago. Keeping with my latest trend, whenever I go somewhere new I find a root beer to review. This time it was easy because someone had alerted me to the existence of BuckSnort (yes, I know the CamelCase name is annoying but that’s how they do it on their website) some time back and I knew it could be found in Boise. I swear that wasn’t the reason I finally made it down there. Really I do. We got it in some place called Pizzalchick which makes pizza and chicken. They even have an elk pizza because that’s what people do in Idaho. I went with my brother-in-law and we picked up some pizza and had a brew at the bar before going back.

The Body is not very sweet. I’d say one of the least sweet brews I’ve had. It kind of has a darker flavor like a root beer barrel candy but not quite that strong. It’s a little bitter as well. The Bite is very spicy with what I want to say is cassia but I really don’t know. There isn’t much fizz in though. The Head is rather unimpressive; short and fizzes away quicker than it should. The Aftertaste is light sassafras with some bitter spice.

I don’t really like this much at all. I prefer a sweeter brew that isn’t so bitter. The owner of Pizzalchick (seriously, what’s with the names around here) showed up and as I commented on the root beer he said that it was completely organic and the most organic root beer we could get with real sassafras and vanilla. Conspicuously missing from his testimony was anything resembling praise for the taste of the brew, and I don’t blame him. The pizza there is good, but skip this.

One Response to “BuckSnort Root Beer”