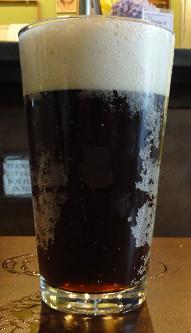 My son, like most little boys, loves trains. This matters because Snoqualmie, WA has a historic train museum that includes a train ride from the historic depot. We had always thought it would be fun to take him there since we always drive through Snoqualmie on the way to my parents house. Then, I discovered Snoqualmie had a brewery that makes their own root beer, and only a block away from the museum. We quickly planned a family outing to see trains and drink root beer. The night before we went, we discovered that it was “A day with Thomas” at the museum, featuring a life sized Thomas the Tank Engine that would pull the train ride instead of the normal engine. Of course it was much more expensive (and a shorter ride) but with all of the additional events that were happening we were glad we went then. After a whole morning of riding trains, looking at trains, taking pictures of trains, and playing with model trains, we went to the brewery for lunch. Of course, I had to start by reviewing their root beer.

It has a sweet and complex Body. The core flavors taste like those generic root beer barrel candies with a lot of wintergreen and clove. It isn’t really creamy at all, but rather, sharp and spicy. The Bite is pretty strong from all of the spices but not harsh from carbonation. It’s still a little more than I prefer though. The Head is nice, medium height and very frothy. It lasts and lasts (at least when you ask them to pour it so it has a Head). The Aftertaste is wintergreen with some clove accents that lingers the right amount of time.

This is a pretty decent brew, but doesn’t really move me at all. While it has a nice complex flavor, it is more sharp than rich and I prefer a rich smooth flavor. There’s nothing unpleasant about it though, so I give it a 3 1/2 kegs, with the nice Head just pushing it over from a 3. So don’t go just to drink it, but it’ll go well with your meal. Just don’t get their pizza, while it’s loaded with toppings, it still tastes pretty bland. Their gumbo, however, is a different story.