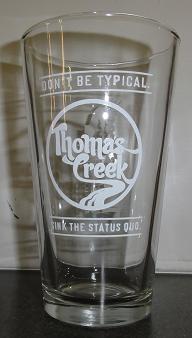 Awhile back, as I was trawling through the vast brand lists of root beers on Anthony’s Root Beer Barrel (that’s right, I capitalized it!) I discovered this one. I emailed the company and asked them about their root beer, since their website mentioned nothing of its existence, and where it could be found bottled. I was told in the reply that it wasn’t bottled, but I could get kegs of it at the brewery if every I were in Greenville, SC. Interestingly enough, at the time I had a paper accepted in the IEEE International Electric Vehicle Conference in Greenville, so heading there wasn’t out of the question for once. When I arrived on Sunday I found out that the hotel I was staying at didn’t have shuttle service to anywhere other than the airport and I didn’t rent a car. I tried in vain to find someone to give me a ride. Throughout this time, the conference shuttle service was atrocious leaving me and my newly met international friends quite stranded and unable to make decent plans. I finally snapped on Tuesday night and decided to sleep in and rent a car in the morning. I was pleased to find that a car for the day would be the same price as a taxi to the airport, and I could even leave it at the airport. Well, that sealed the deal. The first break I got headed off to the brewery with two of my new found friends. When I got there I was finally able to use a line I have been wanting to use for over 10 years now, “Hello, my name is Eric. I’m from gourmetrootbeer.com and I’d like to try your root beer.” Brilliantly it worked! They brought out some sample glasses, one for each of us perfectly poured from a keg, and then at my request, brought out some full sized glasses so I could give a more accurate review.

This is has a medium Body with accents of creamy vanilla and fruity. There is a tad too much fruitiness for my tastes. There is a solid bite from cinnamon and other spices such that it reminds me a of a Myers Avenue Red, though not nearly as creamy. The Head is beautifully frothy because, to quote the head brew master with respect to root beers sporting the 2 second Head, “Those aren’t root beers.” I heartily agree. He adds sufficient yucca to build a beautiful Head but not too much that it starts to taste bitter or gross. The Aftertaste is cinnamon and a little fruity vanilla.

So, a solid brew, better than the average gourmet root beer for sure. It’s tasty and foamy and only comes from kegs. It’s on the milder side so that even the German girl who came with us, Eva, liked it having never had root beer before (Europeans generally detest root beer if you didn’t know). I didn’t really like that fruity flavor though, so it won’t getting my Seal of Approval, but it would be great with a pizza. Which happens to be the only other place you can get it, Brixx Wood Fired Pizza, also in Greenville. There’s talk of bottling it some day in the future, so if they do, I’ll give it another try. Check the pictures below as well. 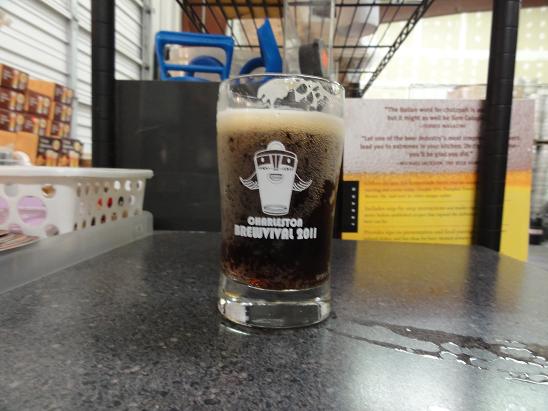 The small tasting glass I was originally given.

Me and two of my IEEE friends trying out the root beer.