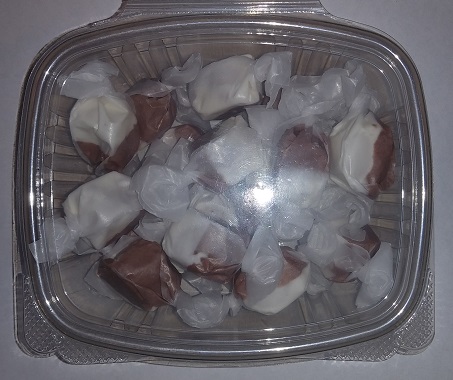 Another find from the Minnesota’s Largest Candy Store, which, as an aside, how do they verify that? I mean, I’m sure they’re just saying it, and it is pretty big, but what if someone opens a bigger candy store, maybe they already have but I don’t know about. It’s something I’ve often wondered about and now you are too, or you’re calling me an idiot but I digress. So Sweet Candy Company has been making candies since the late 1800s and is still a family owned and operated business. They specialize is shipping bulk candies, so probably most candy stores you’ll visit will have something of theirs. They specialize in salt water taffy, which is probably why they originally relocated from Portland, OR to Salt Lake City… More salt water… yeah I’m just gonna move onto the review.

The root beer flavor is strong, generic and a little spicy. There’s noticeable wintergreen. It reminds me of a lot of the root beer hard candies I’ve had. The vanilla portion is rather mild. It’s not near as rich and creamy as it could have been. The combination of the two sides is more like a creamy root beer than an actual root beer float, which isn’t bad, but not really the intention.

These aren’t bad. I kind of like them though they’re nothing special. I’m kind of surprised they call them root beer float and not creamy root beer, but what ever. They’re fine if you want a root beer taffy but not worth seeking out otherwise.