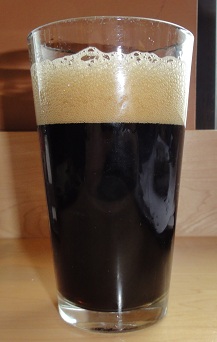 Another serendipitous discovery on my trip to Utah. I had just landed and was heading towards baggage claim when I saw Squatters Pub Brewery. I’ve normally not had good luck with airport breweries having root beer (Old Dominion in DC being the only exception) but figured that since it was Utah, where the majority of the population would rather have a root beer than a beer, I might as well try. I asked the waitress and she proudly told me that they served their own root beer, tapped from a keg, and then insisted that I try some, even though I was en route to the Hires Big H for dinner. She brought back about a quarter pint with ice, and I respectfully declined, citing the ice and said I had to be on my way. But, she was more insistent then ever at this point and returned with another quarter pint sans ice. Not wanting to be rude I gave it a quick gulp and was very impressed by sweet creamy goodness. I told her I’d return in two days for a proper review and then headed off. Two days (and root beers) later, true to my word, I returned to finish the final root beer quest of my trip. I barely made it due to the tight schedule of meetings I had before.

The Body is nice and full. It’s very sweet and it tastes like there’s some honey in it but I can’t be 100% sure. There’s a creamy vanilla hint to it as well. There’s a small Bite too it, though it is more on the smooth side. The Head is medium height and frothy, though it doesn’t last as long as I prefer. The Aftertaste is sweet vanilla with a honey or caramely tilt. It’s really good.

A very delicious brew. The best I’d had so far on the trip. This is definitely one I’m going back for every time I connect through SLC. The food is amazing as well. I grabbed a Pub Reuben to eat on the flight and it was one of the best sandwiches I’ve ever had. This place is so worth the visit if you’re ever in Salt Lake International Airport. Head to terminal C, gate 2. You won’t regret it.