I had already reviewed this in a growler a long time ago, and then they started bottling. This put me in a difficult position as to what to do. I like having a bottle for the collection, but I wasn’t sure if I should review it again. My Facebook followers were all of the opinion that I should review it since it is in a bottle it is a different root beer. Then I checked the recipe and realized it was different. If you remember my first Rogue review I mused over their inconsistency of whether they used 6 or 12 ingredients. This was due to their own site. With their new recipe they decided to take a nice happy medium of 9 ingredients to no doubt satisfy the dueling factions within the brewery. Two of those nine ingredients are just different types of honeys, and the only sweetener is brown sugar. They also added sarsaparilla flavor to it which was definitely not there before. The bottle itself is very cool; 22 ounces and painted. You almost never get painted bottles anymore.

The Body is dark and complex with licorice and a slight hint of vanilla. However, the dominant flavor is fruity sarsaparilla which is also a little sour. The Bite is spicy and sour, it is okay. The Head is excellent anyway you look at it. The Aftertaste is sour with a fruity sarsaparilla flavor

Yeah, I do not like this. It’s much worse than it was before. I think too much brown sugar but really it was too much sarsaparilla. I wish they had toned down the sarsaparilla in it. And where was the honey flavor? I mean if you put two different types of honey, you would think that it would be noticeable, but no. I suppose if you like sour sarsaparillas with licorice; this may just be the brew for you. I will pass. See how it rates against other root beers. 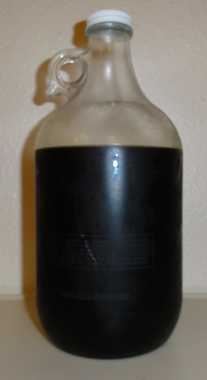 I know everyone’s been dying for me to do another growler root beer review. It’s been over a year and I always am just picking them up off the tap instead of taking them home for later, but finally your wait is over. I’ve known about Rogue for awhile and was even all set to go to a brewhouse that served it but I ended up winning those tickets to the Silver Tips so I went to Scuttlebutt instead. Then The Root Beer Store told me that they had just had a keg of Rogue returned that was 3/4 full and they’d fill me a growler if I wanted, so it’s a little hard to pass that up. Sadly most of the carbonation foamed out during the filling and the foam lasted an exceedingly long time, but I don’t rate the Head for growler brews. According the the Rogue website, this root beer is a paradox. It says “12 Ingredients: Brewed using 6 Ingredients” Perhaps they’ve just fallen into the physics trap of losing a factor of two somewhere but the contradictions don’t stop there. It also says “No Chemicals, Additives, or Preservatives” but then two of those six (12?) ingredients are “Sodium Benzoate & Citric Acid” So either the brown sugar they use is rich is sodium benzoate or something (two things actually) don’t add up (pun intended).

The Body is full but not creamy. There’s a fruity molasses flavor in there as well mixed with spices. The Bite is solid from said spices and I’m sure if it had a full carbonation it would give a good kick there as well. The Aftertaste is a complex molasses and spice with a subtle fruity flavor. The molasses flavor isn’t overbearing but still not my favorite.

So it’s really disappointing. I want to like this but I don’t really. It’s ok, but doesn’t really live up to its possibilities given the ingredient list. I may try it again on tap if I encounter it just to see if maybe it was sitting around for too long or the loss of carbonation somehow sabotaged the flavor, but for now, it’s just a drinkable.