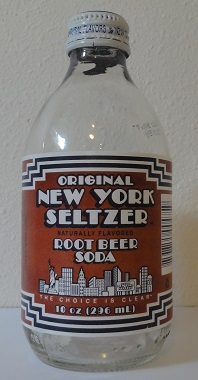 Finally, I’ve gotten a hold of a clear root beer. I’ve been trying to do so since the beginning. Since that Snapple Tru Root Beer that I just missed in the late 90s. Then there was Tommy’s Naked Righteous Root Beer, that I also missed. So when someone tipped me off about this stuff, I had to buy it, no matter the price. Thankfully, the price wasn’t much so I didn’t break the bank. This is the second root beer to come in a little stubby clear bottle. The first was Dr. Brown’s which was also from New York. It must be a thing over there. Though I’ve long wanted to try a clear root beer, I don’t actually have very high expectations, since root beer, if made from it’s original ingredients would have color and it says “All Natural”. So with that in mind I unscrewed the cap and gave it a try.

The Body is mild and generic, but decently sweet and quite refreshing. There’s a hint of fruity to it but it is surprisingly not bad. There isn’t really much Bite other than carbonation burn, and even that is light. The Head is horrible. Classic “Two-second Head”. The Aftertaste is some vanilla and fruity – mild, but not bad.

I was surprised by this as I really thought it would be horrible, but it isn’t bad. It is actually quite refreshing and yet still tastes like a root beer. But it isn’t really a good root beer, what with no Head nor Bite and with such a mild taste. So I don’t think I would drink it again. See how it rates against other root beers.