Mammoth is a fancy sandwich shop in the Eastlake neighborhood in Seattle. Their sandwiches are all ice age-y named things like Saber Tooth, Predator, Dodo, Neaderthal, and whatnot. In addition to their most epic sandwiches, they brew several flavors of house sodas to compliment the many other beers they carry on tap. A coworker of mine told me that they had their own root beer so of course I wasted little time in dropping by. I went for lunch with said coworker and another to give it a try. We missed the bus so we took a Lyft, and the coworker in the front seat kept confusing the driver by pointing things out to us to look at. Though that wasn’t anywhere near as entertaining as our ride back on the bus, where my complaining about massive memory allocated to “miscellaneous files” causing a memory shortage in my Samsung phone elicited some dubious advice from a fellow passenger, a woman of questionable sanity, who insisted I just needed to go to the trash folder and empty it, just like in her Windows phone … she even tried to show me how to do it. But this was superseded when we exited the bus and saw a man trying to remove the anti-theft cap from a vodka bottle by banging it repeatedly against a newspaper vending machine in the middle of a busy sidewalk. I guess he really needed a shot. Both of my coworkers were quite amused at my ordering, emphatically stating there could be no ice and I wanted it with lots of foam, but servers complied. All told, the trip was an amazing success even without the sandwiches and root beer, but that root beer would have been worth it in the most boring of trips.

This brew has a Body that is rich and complex with wintergreen, caramel, vanilla, and even some licorice wrapped around a sassafras core. It’s a little dark but well proportioned and it comes off as delicious. It has a nice spicy Bite too, with those spices adding heat and complexity to the overall flavor. Despite this, it feels very smooth in your mouth. The Head is of decent height and nice and frothy, if you ask them to make it foamy. The Aftertaste is a lingering caramel, wintergreen, and vanilla, all wrapped up sticky and sweet like that makes you both happy and wanting more.

Delicious, and quite unique. I was on the fence for quite awhile as to whether or not this would get the Seal because it was so different. But on my second glass, I knew without a doubt that the brew deserved it. It’s not the sort that you quaff down, but the sort of brew you want to sip slowly and enjoy. And unless you’re pretty rich, you’ll have to as this is the most expensive brew I’ve ever had. $4 for an 8-ounce glass. They even have a line on the glass so they make sure you don’t get extra. And no refills. But it was so good I had to get that second glass. But it was a different server and as she walked off to fill the glass with ice I had to repeatedly scream over the din not to put ice in it. Then it was too late and I demanded a fresh glass because DO NOT DILUTE MY ROOT BEER! All to the vast enjoyment of my coworkers. In addition to being delicious on its own, it goes amazingly well with their sandwiches. I had the Predator, with fried chicken leg, pork belly, Swiss, arugula, roasted red peppers, and caper aioli all on a rustic artisan roll. So, so good. This place is expensive, but worth every penny. You won’t be disappointed. 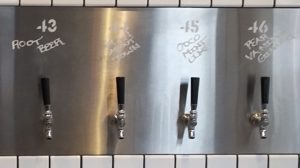 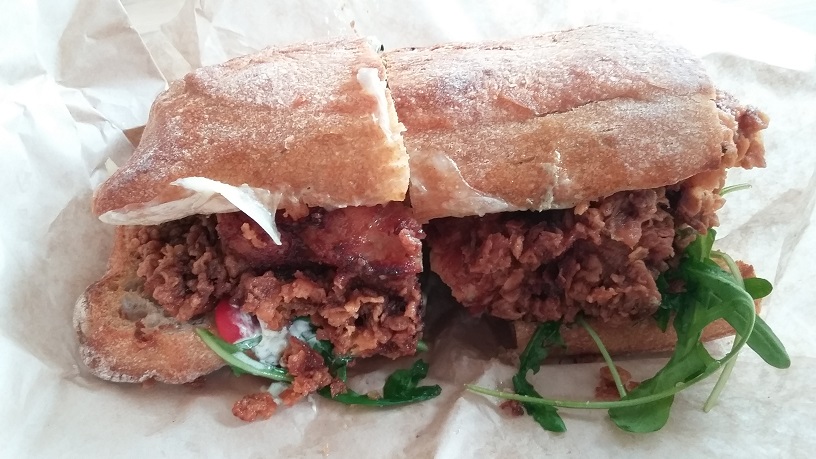 The Predator, one of the most amazing sandwiches I’ve ever had.