So 2 weeks ago, while we were at the Powerhouse Brewery, my lovely wife suggested that we drive the extra 40 minutes south to hit up the Iron Rabbit restaurant to try their root beer. I had originally planned only to do Powerhouse because as much as I wanted to try all the root beer, I didn’t want to have my family stuck on such a long drive. But, she said, no regrets. With that encouragement, we were off to Olympia! The Iron Rabbit Restaurant & Bar is a very classy, yet casual, family friendly restaurant with a diverse menu featuring local flavors. They aren’t a brewery but they make their own house root beer, which is pretty unique. They are also very rabbit themed for undisclosed reasons, and there are bunny decorations all throughout the restaurant. The kids’ menu even has an activity to count the rabbits. I found 15.

The Body is rich with sassafras and honey dominating. The honey is a nice spicy honey which adds to a wonderful Bite. The Head is non-existent, however, even when poured from height, it doesn’t build or stay. The Aftertaste is more of that amazing honey.

Wow, so yummy! That honey is very nice. They said it’s a locally produced honey. I’d give this a Seal if it had any Head at all, but sadly it doesn’t. I even went back to the tap and had them pour with the glass several inches below, so the brew fell quite a distance to the bottom, yet no head would build. What a shame. But also, what a flavor. Give this even the smallest of Heads and it’d be a 4, give it a nice tall frothy one and a 4.5. The food there is amazing as well. We had their Drunken Sailor, a seafood stew with a rum sauce and the curry fish and chips and both were amazing. This place is definitely worth visiting.

The Drunken Sailor seafood stew and the curry fish and chips. Paired with their delicious root beer is worth the drive. 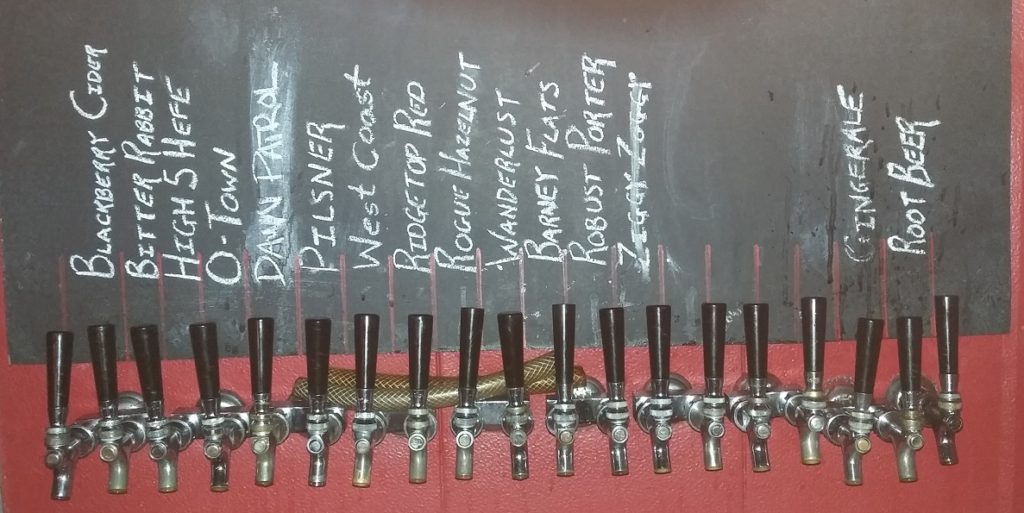 The taps including the root beer at the far right.