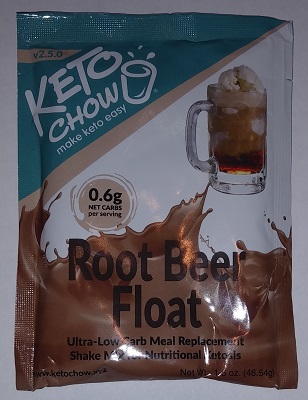 I was looking through Amazon for any root beer things and stumbled upon this. I’ve not had a ton of experience with protein drinks and Keto stuff, but it says root beer float flavor so I figured I should try. Maybe this could be the thing for those poor souls who can’t eat sugar and thus are deprived from proper root beer float … shake type things. No actually, I don’t think that’s the market, there’s sugar free root beer and ice cream. I don’t know. Keto diet people will want this, maybe. It said to mix with half a cup of fat and 14 ounces of water and then refrigerate over night for best flavor. I chose heavy whipping cream as my fat source, since that seems to be more root beer floaty. The next morning I decided this would be my breakfast.

It smells kind of like a root beer float. The taste is initially a small hint of root beer, accented by the cream to make it floaty, and then it tastes like whey protein. Like, it’s really a lot of whey protein flavor. It isn’t really sweet, which makes sense, because it’s a protein shake. It’s also really thick and creamy and rich, but because the flavor isn’t particularly good, it gets pretty gross the more you drink.

Ugh! This is… not so good. I think the slight bit of root beer float flavor is actually quite a detriment, and makes it worse than if it were just “original” flavor, whatever that would be. I think maybe chocolate would work, I’ve had chocolate whey protein shake stuff before, but root beer float is a fail, like fail hard. Maybe someone out there enjoys this, but I fear they’ve been on the Keto path so long they’ve forgotten what root beer and root beer floats are about. Anyways, avoid if you can.