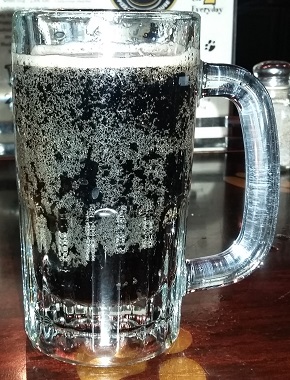 Last week I was in Baltimore on business (at the time of writing this post and it’s going live, I’m back in Baltimore, but more on that next week?). There was of course, one thing I had to get, crab cakes! Ha, you thought I’d say root beer, which is also true, but, you know, nice lump Maryland crab cakes are kind of a must. I’d diligently searched for root beer but not found anything. So, after an early dinner, gorging myself on crab cakes and seafood, I settled into my hotel room, brushed my teeth, got in my PJs and was setting to watch some Anime and YouTube, and then I figured I should browse for root beer just a little longer. I noticed in one of the comments on one of the breweries the line “for a place that makes their own root beer” and realized my early evening of relaxing was over. There were brews to be had! Since I’d already brushed my teeth, I’d need to eat again so the root beer wouldn’t taste nasty, which resulted in my having a rather hobbitish evening of getting a supper after my dinner. The place in question is Pub Dog, a draft house/pizza joint with two locations in the Baltimore area. They give you all your drinks in pairs, which was interesting and led to a rather humorous happening of me saying I’d like a water too, getting two mugs of water, which made me try to clarify that I meant I wanted a water also, to which they responded by bringing me another two mugs of water. But they also brought me two mugs of root beer so after a few pizza slices, I was ready to get to reviewing.

The Body is sweet with a candy-ish flavor. There’s spices and a little vanilla and some wintergreen and it all works quite well. The Bite is spicy, though not very smooth. The Head is medium but gone quickly. The Aftertaste is a nice caramelized sugar flavor with a bit of wintergreen.

It’s a nice solid brew, but not top notch. Yet, it isn’t really generic so it’s worth trying if you’re around. Their pizza was quite nice as well and it has a fun atmosphere and is open until 2 AM even on weekdays, should you ever be taken by a sudden, midnight, desire for a draft root beer.