For the past 37 years, Roscoe’s Root Beer and Ribs has been operating seasonally in Rochester Minnesota. Originally an A&W, the Rosses purchased it in 1982 and made it into their own root beer stand. Over the decades it’s become an iconic place with legendary food, such as their ribs, burgers, and jojos. But, this is their last fall. They’ve finally decided to call it quits, and since the little root beer stand is on their property, the idea of selling it is too much for them. Another iconic, unique, American root beer stand bites the dust. And so, even though I just moved in to a new house, and am very busy unpacking, I knew I had to make the hour and 40 minute trek down to Rochester this past Saturday, to try this brew that will be so sorely missed by the community. My wife asked if such a journey was really worth it. I said that if it would be worth it for anyone, then it would be me, someone who’s spent nearly 20 years searching for new root beers. Plus I haven’t done a root beer stand review in ages. It was pouring rain, but I would not be deterred. Root beer and ribs were ordered.

The Body is sweet and creamy with a classic root beer stand flavor and vanilla and spices shining through. The Bite is medium and finishes smooth, with the spices shining but not overpowering. The Head is tall and frothy, and it’s a shame they don’t have frosty glass mugs to really bring it out. The Aftertaste is a nice spiced vanilla that doesn’t overstay its welcome.

Alas, what a fine brew. I only just met you, but I lament your passing as though we’d been friends for ages. The food was quite good as well, a family order of ribs with sides of baked beans and coleslaw really hitting the spot. It’s only open another week or two, if you’re in the area, you should get some while you can.

The most important part of the menu. 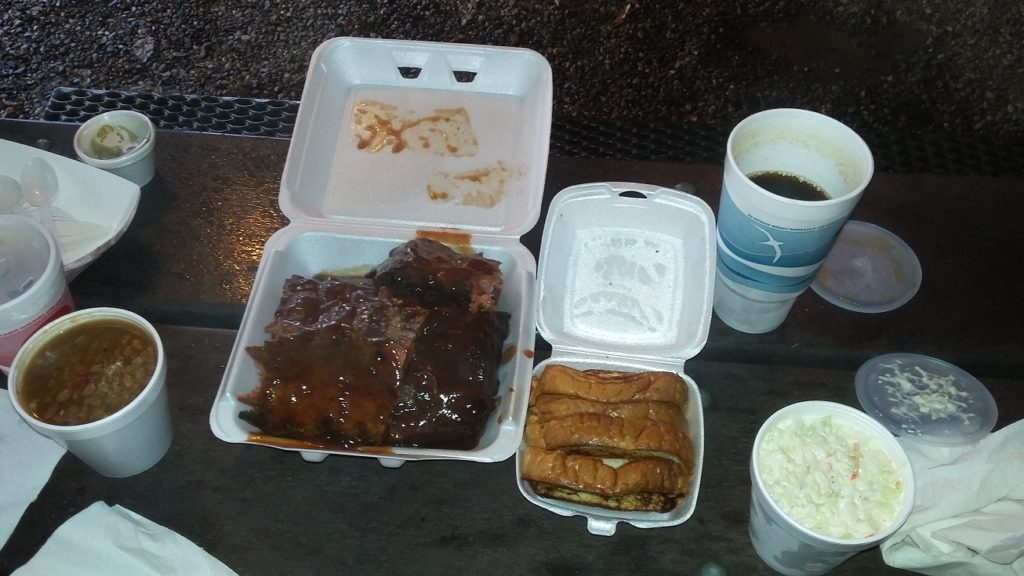 What could be more American than this meal? Very delicious. I ate until I was stuffed.