Last week I had a rather sudden and unexpected business trip to New Jersey. And though you think you may know where this is going, you’re wrong, the first thing I didn’t wasn’t look for some new brewery, but rather to tell anthony that I was coming his way. You see, the only reviewer who’s been doing this longer than me is he, and though we’ve known about each other since the ’90s, we’ve never met. To share a brew with such a one as him was the first priority. And what luck, upon meeting he revealed that he knew of a brewery, not 10 minutes from his very house (and my hotel as it were, though a different direction), that he’d never tried. This was beyond my greatest expectations. The two root beer legends, sitting together for a review. The place was the Demented Brewing Company, who’s small taproom sported a very strange and demonically painted wall. But it was all Jersey Devil themed, which I guess is kind of big over there, so it’s not like they’re all devil worshipers or something. Just local legend loving. Anyways it was a nice small place with a friendly staff and a brew that was, well…

The Body rich and kind of creamy, but the flavors are also mild and standard. It’s sweet, there’s some licorice and wintergreen, a tad bit of vanilla, but it’s not overly strong in any one direction. The Bite is mild too, not much going on in the way of spices. There’s a very short Head but it lingers a bit. The Aftertaste is more mild licorice and wintergreen.

Ah, a pleasant yet forgettable brew. Nice and middle of the road so as not to offend. They said that the get the extract premade and then mix with sugar and a few other things, so it’s not like they put a whole lot of effort into it. That said, they have made sure that it isn’t a bad brew and as an added treat, they just give it away for free, which took anthony and I quite aback when we tried to pay our tab. So yeah, friendly place, nice people, drinkable root beer. 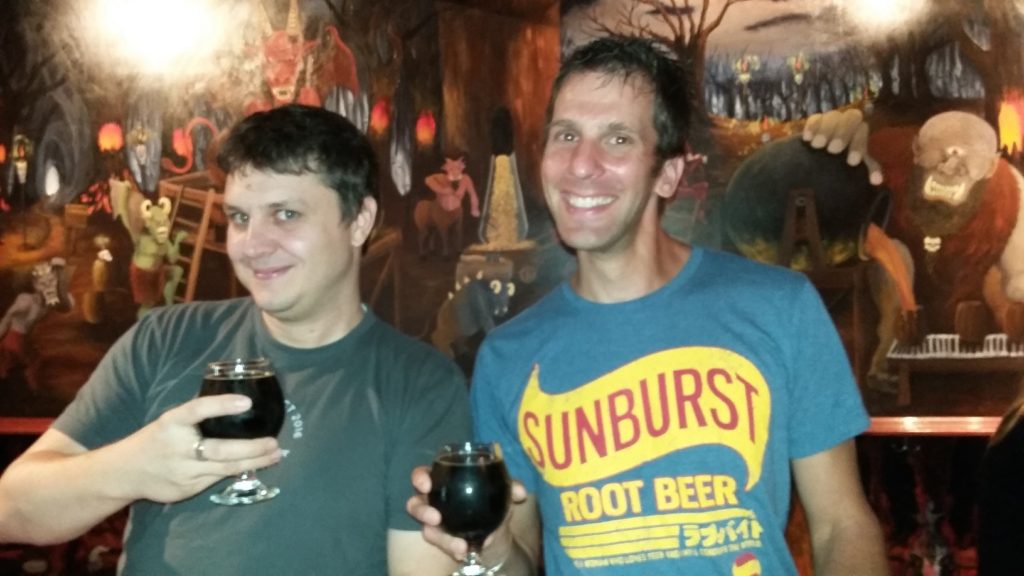 The picture the root beer world has been waiting for for decades.