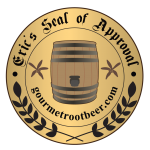 This was the first blonde root beer I’d ever heard of, and only one of three that I know of. It’s made by the Silver Creek Brewing Company in Cedarburg, Wisconsin. They’ve been around only since 1999. They’re small but they still do a unique root beer which is pretty cool. I like the blue and orange-ish label. You don’t get a lot of bright blues on root beer bottles. I’m not so sure about their logo. It has the historic Grist Mill in which they brew, and then a big squiggly blue line all over the picture. Like they wanted to emphasize the creek after they made the picture and just drew it in there. It’s also made with pure cane sugar. I had the hardest time tracking this down but luckily another craft root beer lover, Tony, hooked me up with a sweet trade.

This has a sweet creamy Body with a lot of vanilla. There’s some mint in there as well. Its core is mild but not lacking. It is a smooth brew with not a lot in the way of Bite. I like ’em smooth though I wish there were a bit more spice. The Head is nice and tall. It does dissipates a little faster than it others but hangs around for long enough. The Aftertaste is a nice minty vanilla that lingers awhile.

I truly enjoy this rather unique take on root beer. I liked the other blonde root beer too. This one’s got that nice minty hint to it as well. Definitely worth drinking whenever you can get it. See how it rates against other root beers.