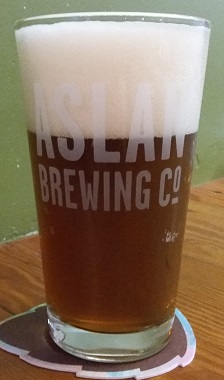 So last weekend my family and I went up to Bellingham for an IEEE PES event at the Spark Museum of Electrical Invention. It was really cool (for a nerdy engineer like myself). And I even won a raffle to get to stand in a big Faraday cage and get blasted by a 4,000,000 V Tesla coil. Fun times. And wouldn’t you know, there’s another brewery in Bellingham that makes their own root beer. Aslan Brewing Company was conceived in 2012 and became a full brewpub a year later in 2013. Their philosophy is on locally sourced and organic ingredients with minimal environmental impact. They make a ginger beer along with Rachelle’s Root Beer. I should have asked who Rachelle is because the website says nothing about her but she is listed on the menu so I’ve dutifully named this after her. When I showed up with my family, everyone was hungry and there was a long wait. The place was crowded and it was pouring rain. I decided to just get a pint of this for review and then go somewhere a bit quieter for dinner.

The Body is bitter with an herbal sarsaparilla flavor. It really isn’t sweet at all. The Bite is nice and spicy and the Head is tall and foamy, but the Aftertaste is bitter, just plain bitter.

Ugh. So bitter. I know they’re going for the whole organic and local, but surely they could have come up with a sweet creamy root beer nevertheless. Though I suppose cane sugar and vanilla doesn’t really grow in Washington so maybe that’s the problem. I give props for trying but really, steer clear of this one.