So another root beer from Anthony’s wonderful package from the East. I’d known about this one for awhile and was looking forward to giving it a try. Curiously, the week I had slotted to taste test it, I got an email from a nice chap named Fred giving me a heads up about ABC Root Beer and telling me that I should try it. It was thus ordained to be. Due to my recent luck of excellent brews, I expected the best. I really like the honey theme to the bottle as well. I love honey in root beer. And this is “brewed with a delightful blend of honey” which I assume means there’s more than one type of honey in it. Or, does it mean that the amount they blend in is a delightful amount leaving a total blend that is a delightful one?

Well, this is quite a ‘stout’ brew. It has a very rich Body with accents of honey and wintergreen. There is a tad too much licorice for my tastes. The Bite is a bit harsh from carbonation though light on spicy. The Head is medium height and fizzes down too quickly. The Aftertaste is a sticky licorice and wintergreen with some honey. It lasts a little too long in my opinion.

Huh, where’s all of that honey they boast about on the bottle? I mean, I could taste some honey, but their whole label was covered in honeycomb with picture of a black bear (what do bears eat?) With that kind honey focus, I was expecting Langer’s or So Duh! Rockin’ levels of honey. At least Thomas Kemper levels. But alas, the honey isn’t quite at the level. It isn’t bad though. This is good ‘stout’ root beer but I prefer creamier, smoother ones. See how it rates against other root beers. 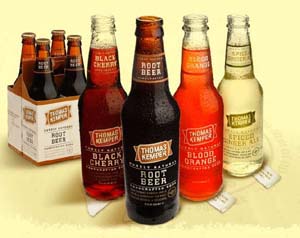 Thomas Kemper Soda of Portland, OR, recently discontinued their Purely Natural Soda line that had been sold in Whole Foods Market and other natural food stores. The line was launched in June 2010. Said company president, Bill Germano, “We loved the product but had difficulty in production.” The remaining stock of Purely Natural Sodas is being sold. As of the time of this post there are still limited quantities available for purchase at a few select outlets.