After nearly 20 years of the same design, Barq’s is going back to their roots in a graphic way. They’re redesigning their packaging to look more like the classic glass bottles (which I’ve already noted are pretty awesome). I must say that I’m impressed with the new theme, especially with the glass bottle six-pack. Now if they’d just make those six-packs available to more of the country, then there would be a huge reason to celebrate. See the press release below.

In its first redesign in more than 20 years, Barq’s root beer is unveiling a completely new look to pay homage to the brand’s Gulf Coast heritage and classically crisp, bold flavor. The new design will be featured on all of Barq’s packaging and is currently rolling-out nationwide.

While the cans will maintain their distinctive silver color, the new look features a diamond pattern reminiscent of the drink’s original 1898 12 oz. glass bottle packaging, which is still available in the Gulf Coast area. Additionally, the label helps celebrate the brand’s 114-year history by keeping the simple slogan “It’s Good. Since 1898.”

“When a beverage as beloved as Barq’s undergoes a significant packaging evolution, we have to remain true to the brand’s heritage and tradition while ensuring the brand is relevant to today’s consumers,” said Christina Manganaro, senior marketing activation manager, Coca-Cola North America. “We think the new design presents a cleaner, simpler look that captures the brand’s essence in a way that will ultimately resonate with both dedicated Barq’s fans and those who are new to the brand.”

Barq’s traces its heritage back to New Orleans, Louisiana and Biloxi, Mississippi where the beverage was founded and first produced by Biloxi Artesian Bottling Works. The brand was later purchased by The Coca-Cola Company in 1995. Since then, the sarsaparilla-based root beer has maintained its trademark bold flavor and caffeine kick reflecting the brand’s well-known tagline “Barq’s has Bite.” 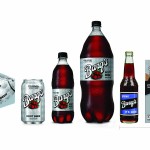 This is probably the most anticipated root beer I’ve ever drank. Ever since I began reviewing root beers in 1998, people would always ask what I thought of Barq’s. It is the main root beer pushed by Coca-Cola and is sold in McDonald’s restaurants, so everyone knows it. The problem though is that I only review glass bottle root beers and I could never find Barq’s in glass. I searched everywhere, throughout Washington State and all up the West Coast. I even scoured the internet, but alas, it was to no avail. I’d always have to shamefully admit that I’d never tried Barq’s, well at least not since I became The Root Beer Gourmet. I still kept up the search over the years, though I had mostly given it up as a lost cause. Then, a few months ago, I tried again. I searched and stumbled across an old discussion board where someone mentioned a market in New Orleans from which Barq’s in glass bottles could be obtained. I pounced. I quickly called the market where they confirmed that they carried Barq’s in glass bottles. I was overjoyed. At long last, it would be mine. “How much to ship it?” I asked. The reply caught me off guard, they wouldn’t ship it. No matter what I offered, the employee then hung up the phone. What? I wasn’t about to be thwarted so easily. But how. My options were few. Fly to New Orleans (I’ve never gone to such extremes for a root beer but maybe), wait until my travels take me to New Orleans (sooner or later I’ll go everywhere), wait until I have a friend go to New Orleans, or find someone there. Then I remembered, wasn’t my Grandmother born in New Orleans? Don’t I have relatives living there? As an aside, this grandmother was of French descent and I had visited France and the region from whence they came. I saw the house that the family lived in for generations and I even met the decedents of the family that stayed in France so this type of family history is rather important to me, it’s my heritage after all. Well that settled it. I was going to close the missing link in the Constantin (the French relatives) heritage of mine and get my Barq’s in the process. I called my dad who directed me to my aunt who put me in contact with my second cousin whom I’d never met, nor even really heard of growing up, named Cynthia. After several wonderfully informative calls about the family over there, she said she would drop by the store and send me a six pack. After what seemed an eternity, but was more like three weeks it finally arrived. One of the bottles was smashed in shipping but the other five were still in pristine condition. They’re pretty sweet looking bottles at that. They’ve got the same vintage style that they did 50 years ago, maybe even older. I bumped it to nearly the front of the root beer queue and finally, after 13 years of searching, was able to try Barq’s. So thank you Cynthia, you’re the greatest cousin anyone could ask for.

The Body is sweet with a very noticeable cola flavor accented by wintergreen, vanilla, and traces of more traditional root beer flavors. It is very different from most root beers I’ve tried. The Bite, for all of the old advertizing “What do you mean Barq’s has bite,” is actually pretty mild. There is a little spice hint and some carbonation tingle. However, the giant caveat with that comes from the fact that the Head is huge but not very frothy. It fizzes down very quickly but before it does it almost escapes the glass. They pack an awful lot of carbonation in it which would give it quite a harsh Bite if it weren’t poured, or at least poured more carefully than I do to evaluate the Head. The Aftertaste is vanilla with a dash of cola.

It is definitely different from the average root beer. I actually like it. It is very cola-ish which I would normally say would merit it a rather low rating for being too far out in the root beer spectrum. But, Barq’s is almost as old as Hires (still searching for that one in glass by the way), and older than classics like A&W and Dad’s, so I can hardly say that they don’t know what root beer should be like. However, it really doesn’t have anything to make it some great spectacular root beer other than the cola flavor, which I’ve already said isn’t normally a good thing. I think that I would certainly enjoy this with a burger and fries and if McDonald’s started serving it in glass bottles, I would drop by and get some (since I’m only a root beer connoisseur, not a burger one). See how it rates against other root beers.