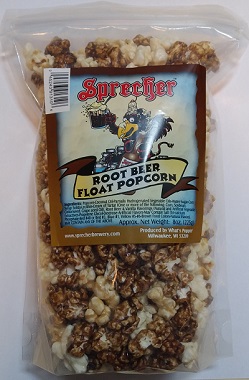 You may remember Sprecher. I love love love their root beer, while their limited edition honey root beer not so much, though it was my 300th review. Anyways, as I’ve expanded into posts on root beer products, I discovered that Sprecher makes some nice additional food stuffs using their root beer. And thus I ordered them all, and made a fun unboxing video cause YouTube is something I’m starting to do, yet not so much so that I’m really advertising it. I mean, kind of, cause I just did, but not really. Anyhow, root beer float popcorn! I’ve never ever heard of such a thing. But I know that flavored and candied popcorn is something that exists so this isn’t too much of a stretch. It’s interesting that there are two types of kernels in this, root beer flavored ones and vanilla ones. It makes me wonder why they don’t make a root beer popcorn as well as the float version. But what you really want to know isn’t that, but will this satisfy your munchies in a root beer sort a way.

The root beer kernals have a nice sweet root beer candy coating. The coating tastes a lot like Sprecher though there’s not the honey flavor that is so prominent in their root beer. The flavor is strong enough that when mixed with the rest of the popcorn kernal, it is still distinguishable as root beer. The vanilla Kernals have a nice rich vanilla cream flavor coating. Together it does kind of give that whole root beer float vibe, in a popcorn sort of way.

I like it. This is very much a root beer munchies treat. I ate half the bag without realizing it, and my family loved it too. So yeah, if you can find this around, definitely get some, or order a bunch from the Sprecher store.